I leave the club at around 2.30am, it’s a Wednesday and we’ve been dead all night. Looking around, it’s no surprise. The streets are so quiet that I can hear the changing of the standing billboard as it shuffles adverts.

I have resigned myself to going to the brothel. I never did have the losing my virginity session and I’m still loathe to go through with it. However, the strip club is getting worse and worse. It’s that much harder to work and make money. The other performers had been talking about it all night and with twenty pounds in my pocket, two hundred pounds over my overdraft limit, a re-possessed car and rent coming out in ten days. I was desperate.

As I neared the Massage Club my heart started to beat really fast, I was near panic now. Logistically, I know that brothels are usually safer than other forms of working but also Bristol does not have a great selection in terms of safety. I start imagining what I should say, I start thinking I should have called ahead or that I should have gone in the day, like the Whore said.

I’m outside the door.

For some reason, I keep walking. There is jungle music playing somewhere but that’s not exactly unusual in Stokes Croft – I presume it’s coming from a window. Just then, I hear voices and as I round the corner, there’s a fire right there on Turbo Island. Sat around the fire are a hodge podge of Bristolians ranging from hippies smoking weed, a collection of rich teenagers on Mandy, homeless people and randomers who had stopped to see what was going on. No-one knew who started the fire but it was being kept going by a pile of broken furniture. 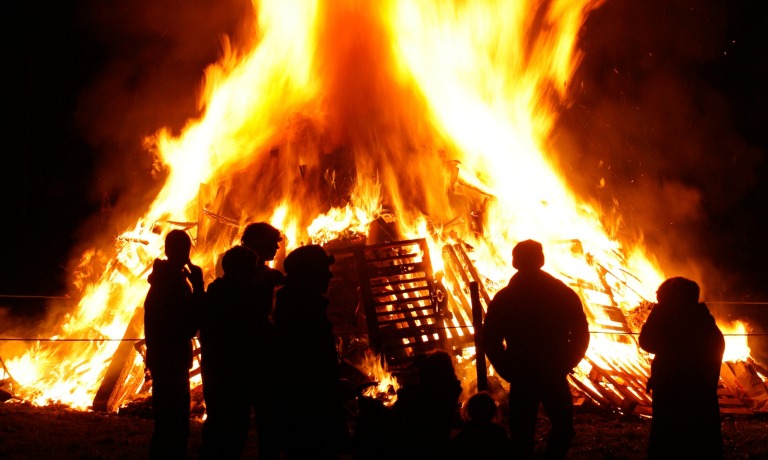 While I was watching on, a gentleman waved over to me, “Hey, do you want a beer?”

I look back, the club is still lit in an eerie red glow, the only club still open on the street. I turn away.

“How did you end up here then?” the gentleman is sharply dressed and attractive.

I talk to the gentlemen for around half an hour before their drunkeness betrays the continuity of the conversation and I make an excuse to slip away.

I park myself between an Indian boy and a scrawny white boy with thick rimmed red glasses. I’m interrupting their conversation but they don’t mind. Everyone here is friendly, something about the communal atmosphere of a street fire, people weren’t keen on starting drama or betraying anyone’s good nature.

The white boy answers first, “Our mate died today.. We came from his wake.”

“No, man, that’s OK. A lot of us are here for that. You see that mural? That was our boy. He would have loved this fire.”

“No, no. We don’t know how this started but we’re enjoying the vibe.”

It turned out the guy who died was a musician, no one said how old he was or how he died but his friends were all really young, all between 25 and 30 which suggested that he couldn’t have been much older.

We all stayed up until the last bit of furniture was burning, by then it was around 6am and the morning buses had started to chug through the streets. Somewhat reluctantly, I said goodbye to people I knew I’d never see again and headed home.

The whole night felt like a lesson but I’m not sure what I was supposed to learn.

I rang the Whore on the bus home, “Do you fancy coming over?”

“Sure, how was your night? Did you go to the brothel?”

One thought on “Fate intervenes”